Introduction by the Auther 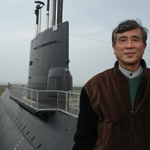 It was in spring of 2003 when my wife and I left Los Angeles to spend the next 101 days traveling around the world. The plan included stops in the Pacific Islands, Japan, China, Malaysia, Pakistan, the United Arab Emirates, Turkey, Bulgaria, Romania, Russia and the Netherlands. But our trip was cut short in Beijing when the SARS scare broke out, leaving us no choice but to return home on the 46th day.

It was by strange coincidence and something that may be called ‘karma’ that this event turned into the beginning of another journey altogether – a search for my long-lost father. During the Pacific War my father served as chief engineer aboard a Japanese submarine, and died in action somewhere in the southern seas when I was 3 years old. My desire to find out more about this submarine took me across the world to different places and people – and how surprisingly wonderful this journey has been. I found the surviving families of the crew who were on the Dutch submarine destroyed by my father’s submarine. I located the relatives of my father’s shipmates and finally met the British submarine commander who was, at one time in history, my father’s enemy.

This pilgrimage to honor my father began in 2003, and still continues to this day. The three submarines from Japan, the Netherlands and the United Kingdom had engaged in a fierce, unrelenting underwater battle during the Pacific War. Six decades later the 97-year old commander of the British submarine and the children and grandchildren of the submarine crew have found a relationship of caring and sharing in place of animosity. Our paths have crossed in a most amazing way, and that alone may be called a miracle.

Through this journey, both my wife and I have come to believe that the world is a far more fascinating, rich and endearing place than we ever imagined. If we could only take a moment away from our hectic life, we just might be able to feel the presence of those loved ones, no longer here, in the familiar sights and sounds that surround us. Perhaps they are somewhere in the tender breeze or in the warmth of the light that shines upon us, showing that they still care. I see the world this way because I now feel reconnected with my father. And through him, I’ve met many wonderful people. This is the story I’d like to share with you.

About the Author – Akira Tsurukame

Akira Tsurukame was born in Kagoshima Prefecture in 1941. Upon graduating from La Salle High School (Kagoshima), he entered Kyoto University of Foreign Studies and began his career at New Orient Express, a travel agency. In 1966 he went to the United States as an expatriate and worked at the Los Angeles and New York branch offices for 13 years. After his sabbatical leave in 1979 and first trip around the world with his family, Mr. Tsurukame founded California Coordinators, Inc. in Los Angeles in 1980 to advise and support Japanese companies establishing businesses in the United States and Mexico. He also founded the Business Cafe, Inc. to assist U.S. high-technology business ventures entering the Japanese market. His focus is currently on the launching of YUGOBI, a new Internet broadcast station. Mr. Tsurukame lives in Lomita, south of Los Angeles, with his wife and son.

“In Search of My Father Beneath the Blue Sea – Three families, three nations, and a journey of reconciliation”
tells the captivating account of Akira Tsurukame, a Japanese resident of California, who begins research on his father, lost 60 years ago during the Pacific War in a submarine of the Japanese Imperial Navy.His search for the location of his father’s final resting place takes the author on an entirely different journey full of unexpected discoveries and encounters in Asia, Europe and the United States.It is a story of remembrance, reconciliation and understanding – as well as hope for lasting peace and friendship between former enemies. Published in Japan on July 17, 2007 from Gakken Co., Ltd. In Japanese language.